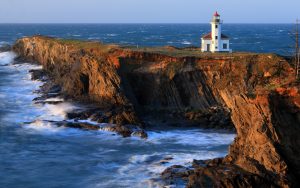 God’s law was the perfect test and standard of man in Adam. The law was a covenant to be kept, a religion (Judaism) to be practiced, and a means by which God would govern His people. Judaism is a works-based religion. The law represents the perfect measure of what man should do as his responsibility before God. The Jews were separate from the Gentiles by physical birth and natural descent, by the land they were to possess as an inheritance from God, and by the religion they practiced as given to them by God – this last was the wall of division God had purposely built up around the nation of Israel (Eph. 2:14-16). On the other hand, Christianity represents what God has done for sinful man through the cross of Jesus Christ. Christianity, and the church for that matter, are the result of God pulling down and destroying the wall of division He had built up and maintained in Judaism. God has only ever sanctioned the practice of two religions. When they are compared with each other, the principles on which the two religions are based are fundamentally and unequivocally different.

More articles providing detailed information on the differences between Judaism and Christianity:

You are here:Home / THE LAW (JUDAISM) WAS A TEST OF RESPONSIBILITY GIVEN TO THE JEWS AS A CHOSEN AND PRIVILEGED PEOPLE, SEPARATING ISRAEL FROM THE GENTILE NATIONS. IN CONTRAST, CHRISTIANITY IS THE PRODUCT OF GOD’S SOVEREIGN GRACE, AND AS A RELIGION, IS COMPLETELY DIFFERENT FROM THE PRACTICE OF JUDAISM