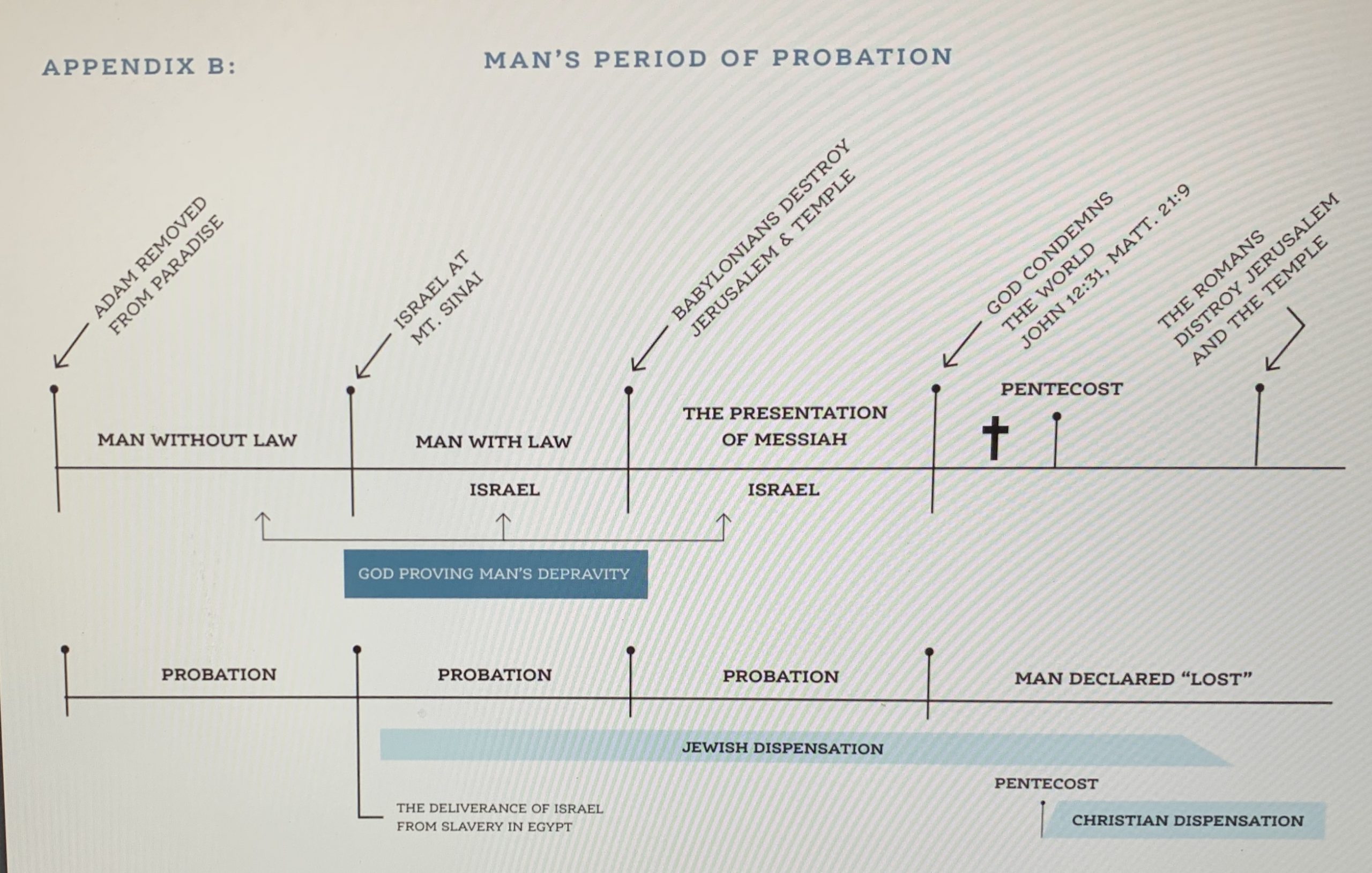 Summary: Written and Published April 2020: The above picture is of a chart in the back of my fourth book, How to Better Understand the Bible — Dispensationalism Made Simple. It is the chart which depicts the period of time God had placed mankind on probation. This is a vital biblical concept for all believers to comprehend. The failure to do so leads to a great amount of poor and erroneous teachings.

God placed mankind on probation when He evicted Adam and Eve from paradise. Adam had disobeyed his Creator and was judged. He was no longer in his original state of innocence, but had become a fallen sinner. The Spirit through Paul says this (Rom. 5:12), “Therefore, just as through one man sin entered the world, and death through sin, and thus death spread to all men, because all sinned.” We can see certain biblical truths in this one verse. Adam disobeyed God and was responsible for “sin” entering the world. Along with sin came death, and both spread equally to all mankind. Adam was the federal head of the human race. His fall was everybody’s fall. Mankind was now both mortal and under the dominion of sin.

Being chased out of the garden represents mankind judicially separated from God. God’s probation of man starts here. This testing would last all the way to the cross of Christ. God was proving/revealing to mankind what his new fallen state was and its consequences. It wasn’t that God didn’t understand what man had become under sin. The probation of man didn’t mean that God was making new inquires in order to gain knowledge and understanding He did not possess. God, as God, knows and understands all things. He knew exactly what mankind had become through Adam’s disobedience. Probation wasn’t for God’s benefit, but for man. It was imperative for mankind to realize the seriousness of his fallen condition in Adam, and that in and of himself, he had no ability, no strength, and no resources to do anything about it.

If the reader would refer to the chart at the head of this article, it shows that the probation of mankind involved three specific ways in which God tested him.

With the crucifixion of the Son of God, man’s probation came to an end. At that time God declares mankind as lost, disobedient, and without any resources to save himself. Jesus says this (John 12:31), “Now is the judgment of this world; now the ruler of this world will be cast out.” Also right before the cross (Matt. 21:19): Seeing a fig tree by the road, He came to it and found nothing on it but leaves, and said to it, “Let no fruit grow on you ever again.” And immediately the fig tree withered away. [The chart above and appendix B in the book should read Matt. 21:19 instead of Matt. 21:9]

This was what God was proving to man — that he was a dead and lost sinner, utterly depraved in his condition under the dominion of sin. Paul teaches that all mankind had sinned and fell short of the glory of God (Rom. 3:23), that both Jew and Gentile are equally under sin (Rom. 3:9), and that the whole world was guilty before God (Rom. 3:19). Paul even goes to lengths to describe mankind’s fallen state in remarkable detail;

“There is none righteous, no, not one;
11 There is none who understands;
There is none who seeks after God.
12 They have all turned aside;
They have together become unprofitable;
There is none who does good, no, not one.”
13 “Their throat is an open tomb;
With their tongues they have practiced deceit”;
“The poison of asps is under their lips”;
14 “Whose mouth is full of cursing and bitterness.”
15 “Their feet are swift to shed blood;
16 Destruction and misery are in their ways;
17 And the way of peace they have not known.”
18 “There is no fear of God before their eyes.”

This is the utter depravity of man. In Adam, all mankind was a fallen sinner and hopelessly ruined. Left to himself, mankind’s state was unresolvable. God spent four thousand years proving this to mankind. Under every condition and every way God provided, man proved he couldn’t obey. At the cross, the probation of mankind comes to an end. The crucifixion of Christ is the ultimate proof of man’s disobedience and depravity.

It is vitally important we comprehend from Scripture the big picture view that biblical principles provide us. Looking closely at the chart the reader sees that the last two periods of probation only involved God dealing with the nation of Israel. In order to test mankind under the best of circumstances, God eventually chose a people unto Himself, separated them as a nation from all other peoples, and privileged them with advantages above everyone else. The Jews became God’s chosen people and special to Him (Deut. 7:6-9). He delivered them out of slavery in Egypt and gave them His law, making it a covenant for them. They had the tabernacle and the priesthood, and the manifested presence and glory of God dwelling in their midst. They were the only ones given the oracles of God, the covenants, and God’s calling. He blessed Israel as much as it was possible to bless sinful man. We should be able to comprehend what God was doing — to test mankind, God needed a group who would serve as a test-case. The Jews were God’s test-case; they represented all mankind during the last two periods of probation; God gave them every advantage possible. If the Jews failed, there was no reason to test other groups.

This probation period was longer than the Jewish dispensation and encompasses it entirely. Even though there were many important biblical institutions and principles in play during the Jewish dispensation, all were destined to miserably fail because all were left under man’s responsibility during his probation. Fallen mankind could not possibly obey God’s will, could not please God (Rom. 8:8). God knew this and was proving it. This was the critical truth man was being taught and had to learn. Therefore, the Jewish dispensation was a complete failure. Why? Because obedience was required of fallen mankind, who, in himself, had no power, no ability to obey. It didn’t matter what God set up in grace; when man was given responsibility to care for it, he always corrupted and ruined it. Law, government, promises, covenants, and calling — all a failure. Priesthood, prophets and kings — all was ruined. Then there was the nail in the coffin, so to speak, for both man’s probation and the Jewish dispensation — when God Himself came in human flesh, they rejected Him, tried and crucified Him. With this, the probation of mankind was over; so was the Jewish dispensation. Man was declared lost; the Jews were set aside by God.

What was the purpose of God? In order to comprehend the big picture view of the Jewish dispensation, we must know for certain the purpose of God concerning the things associated with the dispensation.  Was God’s law given to Israel for life and righteousness? No it wasn’t; actually, God’s purpose was condemnation and death, the opposite realities (2 Cor. 3:7, 9). Could the practice of Judaism save a Jew? It could not; all those of the law were under a curse, practicing a life-less religion of fleshly ordinances (Heb. 9: 6-10), a religion characterized as according to the weak and beggarly elements of the world (Gal. 4:3, 9), and a covenant which God was never pleased with and eventually considered obsolete (Heb. 8:13, 10:1-9). God’s purpose for giving Israel the law? Israel was the test-case proving the utter depravity of mankind. What was God’s purpose for sending His Son into the world? Was it to bring about a Messianic kingdom in Israel at that time? No doubt Jesus was their Messiah; no doubt Jesus was sent to the Jews. But was God’s purpose to set up a Messianic kingdom at that time? The correct answer is absolutely not. God’s purpose for sending Jesus was for Him to suffer and die on the cross (Rom. 8:3, Phil. 2:6-8, Heb. 10:1-12) — practically the opposite thought from a Messianic kingdom. What was God’s purpose for the Jewish dispensation? Simply said, for it to completely fail, proving mankind’s depravity.

The purpose of God must overwhelm us to the point that it exercises authority over our spiritual understandings. It must direct and regulate our interpretation of Scripture. The law was given to condemn the Jews; Jesus was sent, not to be King over them, but to be rejected and put to death by them (Matt. 20:28). This is the big-picture view of the Old Testament and the gospels, even reaching into the book of Acts (the first seven chapters are the Holy Spirit’s testimony to the Jews of a risen Messiah). Then God does something completely different from all that has been set up before — He turns to the Gentiles and starts building the church (Matt. 16:18).

You are here:Home / Redemption Truths / MANKIND’S PROBATION, THE JEWISH DISPENSATION, AND THE PURPOSE OF GOD